I Get The Sweetest Feeling - Brass Band

The track is a Motown inspired song recorded during his Chicago period when Jackie Wilson regained energy and started to record many singles and albums again.

The track was written by Van McCoy and Alicia Evelyn.

The orchestra was directed by Willie Henderson with Motown's in-house band Funk Brothers performing the instrumental track with The Andantes providing the background vocals.

The single was originally a moderate chart success securing a No.34 position on the Billboard charts.

Four years later, the single was released in the United Kingdom and managed to become a top 10 hit, reaching number nine.

After the success of the re-release of "Reet Petite" in 1987, it was decided to posthumously re-release this track as well.

The re-release hit the British top 10 again, peaking at number three in the UK Singles chart. 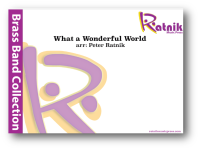